This post is about my 2 cents about upgrading from Windows 7 pro x64 to Windows 8 pro. I have been a Windows user since 3.11 and have never upgraded a Windows installation. I have been clean installing all versions.

My Dell notebook is from 2009. It had Vista installed by default and was ready for Windows 7. In fact, it came with a free upgrade from Dell.

I have blogged about my win8 test drive earlier. It still had the windows start button in that build and had no metro/live tiles. It is almost a year ago.

My dell xps16 has a limit of 4gb and has an Samsung 830 SSD 128gb as laptop upgrade kit (which is really recommended).

My first step was to make a backup. I had backups around because SSD can fail in a blink of an eye. As side note: my Samsung drive has never let me down. In fact, it made my Windows 7 really fast!

So the upgrade was just a next, next finish thing and took about 2 hours and several reboots. After that, my system was good to go.

Reasons to upgrade to win8

This is actually enough reasons already to upgrade.

The Windows key is everything! I already used the key a lot in win7, but now even more! Here are the shortcuts I used in Windows 7:

and now the additional for windows 8: 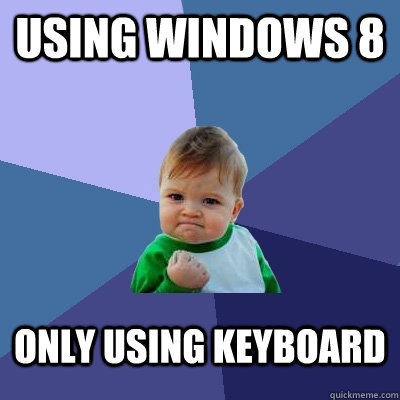 You now have file history! The files are stored like normal files so you can access them easily. You can also set Windows back to a fresh install!

Bitlocker in already in pro and also Bitlocker portable. In Windows Vista and Windows 7 you needed the ultimate or enterprise edition to have Bitlocker.

Auto updates are installed in the background. So non-tech people have secure and up to date systems with win8.

it has a lot of changes under the hood. With printer drivers and direct X and all those changes make windows 8 fast!

don’t be scared. I have no touch enabled device and use Visual Studio 2012 and Office 2013 all the time. I only notice the new metro stuff when I login and press the windows key. But it is so responsive and fast that it is not annoying. And you can control everything with the keyboard. Also all the metro stuff! So there is NO reason not to upgrade! I am running Windows 8 in desktop mode the whole day. There are some small applications that give you back a start button. But if you actually require those hacks, you are using the operating system not how it’s meant to be used.

So to conclude this post: Upgrade from Windows 7 to 8 today! It’s only 30 euro’s according to the upgrade assistant. So it’s a bargain!